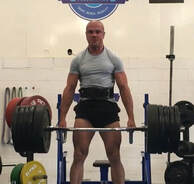 MACRO LOADING-DAN JOHN-BIG PLATES
Years ago I read an article by Dan John about only using the big plates. Dan is American so big plates for him meant 45lbs and  25lbs. When I first read the article, I thought it was silly. I thought I knew better despite being a complete novice. I read comments on various internet forums saying that they didn't think it would work and I dismissed it. A few years later read it again, but this time I gave it a go. For the squat and trap bar deadlift, I started to only use 20kg and 10kg plates. I did this for several years and it was one of my best periods of training.

So many people waste time looking for the 'best' way to train. They spend more time reading about different programs than they do training and end up program hopping and spinning their wheels. The vast majority are of people I see don't make progress because they focus on stuff that isn't important yet and they don't do the basics. It's understandable, as the basics are boring and looking for the perfect program is much more exciting.

The basics people just starting training should focus on are,If you look at the biggest and strongest people's training, you'll see they all got there with a variety of different training programs. There's not one workout or style of training that's the best. Just pick one and stick with it.

How I set up my training when only using big plates

I would normally alternate between two weights. For example, for a long time I was squatting 160kg one workout, and then 180kg for the next workout.
The ways I would track progress before increasing the weight was.
My main goal was to increase the reps I could do for a top set. The target would be to eventually be able to do at least 14 or 15 reps. If you go from 140kg x 7 to 140kg x 14, you will be much stronger.  I would then do 1-5 sets and try to beat either the top set record, or beat my record for total reps for all the sets. Sometimes I would add a single as an overwarm set.

The next time I would try to get more than 12 reps on the first work set and more than the 26 reps I did over the 3 sets.

While I had success with it, I wouldn't ever get my clients to do it. Most people wouldn't be able to stick to it. They would find it boring doing the same weight for so long. However, I believe most people I see in the gym would do better if they did this and focused on the basics.
At one point I could squat 140kg x 7. I stayed at that weight for 3.5 months but could then do 140kg x 15. I added around 35kg to my one rep max in three and a half months without increasing the weight.

The point of this article isn't for you to just use big plates, but you can become very strong with a sticking with simple plan.
​If you're not very strong and struggling to make progress,​ the chances are that you need to improve at doing the basics consistently and stick with a program instead of looking for a complex progression method.
​
G-G7R9DENY71