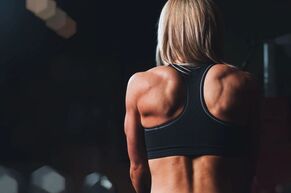 Two Days A week Training
One reason people fail to stick with a healthy diet and exercise routine is that they have an all or nothing attitude to training and diet. They will start a diet and training routine that isn't realistic for them to stick to for long.

We all know someone who has started a diet and not been able to do it as it was so restrictive. It's also common for someone to come to the gym and tell me they want to train five or six times a week.  While it's great that they are enthusiastic about starting training, but there's no point if they end up giving up in the first month. On the other side, there are people who don't even start as they believe they don't have time to go to the gym.

You don't have to live in the gym to make progress. You can get good results only training as little as two to three hours a week, and by making small changes to your lifestyle.

A really good example of what can be achieved while only training twice a week and being sensible with her diet is my client Sam
While Sam hadn't been training before seeing me, she wasn't in awful shape. She had a little bit of weight to lose and wanted to tone up a bit.  She isn't a gym junkie and didn't want to spend a lot of time in the gym. She wouldn't have stuck with it if she tried to go four times a week, and going to the gym would have become a chore for her. So we agreed she would train two days a week.

Sam has been training with me since the end of October, and while only training twice a week, she hasn't missed a single session, doesn't moan (too much!) and has given 100% every time.  As a result, she has made brilliant progress on all her lifts. When it comes to diet, Sam hasn't made any drastic changes. She's still eating the foods that she likes, has the occasional takeaway and drink.  What she has done is been more aware of her portion sizes, made sure not to eat too much and she has been very consistent. This hasn't been too hard for her to do as she hasn't felt like it's restricted her and fits into her lifestyle. She can easily continue to eat like this.

Since she started she has lost 6.5cm from her waist while gaining 5cm around her bum! She's also added 3cm to her legs while losing fat.

Everyone can make time for two training sessions a week if it's important to them. Don't put off starting just because you can't do a lot of days. Something is better than nothing, and you might surprise yourself with just how much you manage to achieve.